Solar Power Benefits Everyone, Not Just Those With Solar Power

As thousands of homeowners install solar panels and consume less electricity from the grid, there’s growing debate about who should pay for the upkeep of poles and wires that make up the power system.

In the one corner are utilities who say solar-households are free-riding. That is, they’re using the grid when the sun isn’t shining, and when they want to sell power back to utilities under net metering rules, but they’re not paying for the cost of maintaining infrastructure that allows that. In the other corner is the solar industry, which points to the benefits of solar in improving grid “resiliency,” not to mention solar’s wider environmental benefits.

A paper by Robert Kaufmann, a professor of earth and environment at Boston University, adds something to the discussion. Analyzing the hour-by-hour flows of power in the Massachusetts network, he shows that solar has a positive overall effect even for electricity consumers who don’t have rooftop PV.

Residential solar is useful to the grid because it’s most productive when the the system needs it most: say, in the middle of a summer’s day, when people are running their air conditioners. By reducing the power utilities need to meet demand, they save managers from having to turn to the most expensive and inefficient stations that go on only at times of extreme need.

END_OF_DOCUMENT_TOKEN_TO_BE_REPLACED 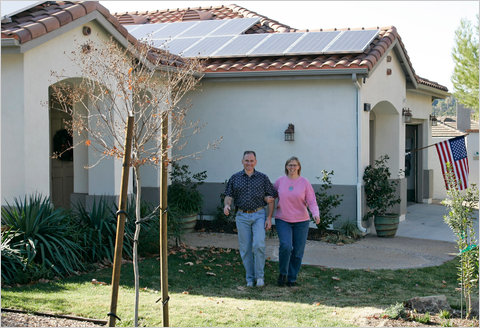 Jack Smith/The New York Times
When Bill and Suzann Leininger put solar panels on their Escondido, Calif., home a few years ago, they most likely enhanced its resale value, a new study says.

All those homeowners who have been installing residential solar panels over the last decade may find it was a more practical decision than they thought. The electricity generated may have cost more than that coming from the local power company (half of which, nationwide, comes from burning coal), but if they choose to sell their homes, the price premium they will get for the solar system should let them recoup much of their original capital investment.